Who is Pastor Nick? 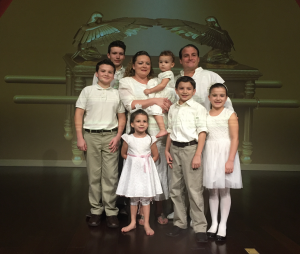 In Revelation 12:11 it says, “And they overcame him by the blood of the Lamb, and by the word of their testimony; and they loved not their lives unto the death.”  Every child of God has a testimony and this is how we overcome the devil. Our testimony is also a great witness to not only lead others to the Lord but to encourage them.

I was born again (saved) in March, 1992, at the age of 24, and my whole life was radically changed. I was brought up in the Catholic church but was not practicing my faith and only occasionally would I attend mass. There’s a big difference between believing in God and being born again. When I became born again, I attended a local Baptist church and was baptized in water there. While attending a Word of Faith church, I was baptized in the Holy Spirit.  Being filled with the Holy Spirit has equipped me to walk out this journey.

I was later led to attend a non-denominational church in Brandon and worked with the youth ministry there. God was stirring a great interest in me to visit Israel. I even bought a tour book. The Dryer family began to attend this church as well, and Tikvah Dryer brought Davidic dance with her.  As I got to know this family they began to share the Hebrew roots of the Christian faith with me. They also shared with me how I was grafted into the olive tree that represents Israel (Romans 11:13-24). I celebrated my first Feast of Passover with them in 1995.

In 1996, Randy and Tikvah Dryer felt led to start a home fellowship to teach the Hebrew roots of Christianity.  I had been playing the guitar since I was a teenager and they asked me to lead worship for their Saturday services. I have to say it was very exciting to sing Messianic songs – some in Hebrew!

I took my first trip to Israel for the Feast of Tabernacles in 1996 with a group led by Randy and Tikvah. The following year I was able to go to Israel again for the Feast of Tabernacles, and on October 19, 1997, in Jerusalem, I confessed my love for Randy and Tikvah’s daughter, Danielle. We began a courtship and were married on July 24, 1999.  Since that time we have discovered the truth of betrothal and now practice that at Beit Tehila.

In the fall of 1999 thanks to Rabbi Ralph Messer, Beit Tehila began their first Torah cycle. Pastor Randy, now my father-in-law, was directed by the Holy Spirit to have me ordained in April, 2002. That same year the Holy Spirit led Pastor Randy to purchase nearly five acres of land and erect a modular building in which to meet, and on September 20, 2002, Beit Tehila started meeting at our eighth location (where we still meet today).  While Pastor Randy was busy getting everything set up he got cancer, and God took him home on November 17, 2002.  At his death, I was appointed Pastor of Beit Tehila Congregation.

Danielle and I now have seven children: three sons and four daughters.  We reside in Brandon, Florida.

I want to thank Pastor Randy and Pastor Tikvah Dryer (now Tikvah Kolbo) for allowing me to carry on the vision that was given to them.  I am blessed to serve the Body of Christ at Beit Tehila and it has been an exciting journey.